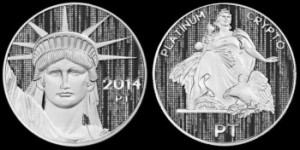 Name origin: Platinum is a chemical element with the chemical symbol Pt and an atomic number of 78.  Its name is derived from the Spanish term platina, which is literally translated into “little silver”. It is a dense, malleable, ductile, precious, gray-white transition metal.  Platinum has six naturally occurring isotopes. It is one of the rarest elements in the Earth’s crust and has an average abundance of approximately 5 μg/kg. It is the least reactive metal. It occurs in some nickel and copper ores along with some native deposits, mostly in South Africa, which accounts for 80% of the world production.

Download the latest version of Platinum Coin wallet from the official website to avoid issues. Platinum Coin can be mined with any SHA-256 ASIC hardware.

This entry was posted in PT - Platinum Coin. Bookmark the permalink.